Founded in 2006, the Krause Essay Prize is awarded each year to the work that best exemplifies the art of essaying. As a celebration of inquiry, experimentation, discovery, and change, the Prize seeks to honor work that emphasizes the activity of a text, rather than that text’s status as a dispensary of information.

Open to projects in any genre, medium, or form—be it text, film, radio, performance, or other—the Krause Essay Prize intentionally stretches the definition of “essaying” in order to celebrate work that is defined by what it does—the activity that it engages in—rather than what it is.

Nominations for the Prize are made each year by an ever-changing committee of twelve to fifteen writers, filmmakers, radio producers, visual artists, critics, editors, and readers. Each of them selects one essay from the previous year that they most enjoyed and admired, submitting it with a brief paragraph of support. Nominators remain anonymous until the winner of the Prize is announced.

To discover this year’s nominees, click here. You can also explore nominees from the past here.

Projects that are nominated for the Prize become the primary texts in a semester-long graduate writing seminar taught each spring at the University of Iowa’s Nonfiction Writing Program. After a series of papers, presentations, and discussions about the essays, the graduate students in the seminar choose the winner of the Prize.

Winners of The Krause Essay Prize receive $10,000, a handmade walnut letter box inscribed with their name and the title of the winning essay, and an invitation to the campus of the University of Iowa for an award ceremony and reception in their honor.

The Krause Essay Prize is made possible thanks to a generous gift from the Kyle J. and Sharon Krause Family Foundation. 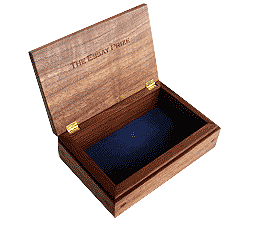