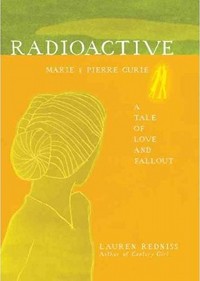 It is part biography, part love story, part scientific history and cultural observation—a myriad of modes that are united seamlessly and ingeniously by Redniss’ collaging of archival photographs, a wonderstruck writing style, and her own dreamlike images.

Beginning as a biography about the Curies—the first people to ever win two Noble Prizes—it lays bare their childhoods, their fiercely intense love story, their scientific collaborations, and the way their toxic discoveries, which included radium and polonium, slowly poisoned them and ultimately caused their deaths. Expanding out from there, the book ranges through the inevitable consequences of their discovery of radium: the commercial, cultural, physical and spiritual.

In Radioactive we learn about radium-laced toothpaste, condoms, suppositories, cigarettes, pillows, bath salts, and even chocolate,. The book tours the Nevada Test Site and the thousand nuclear bombs that were tested there in just one year. It visits the Merry Widow Health Mine in Montana, where desperately ill Americans went to breathe radioactive air in the hope that it might cure them. And it even offers a meditation on Hiroshima that manages to indirectly shed light on more recent cultural phenomena like Three Mile Island, Chernobyl, and Fukushima. 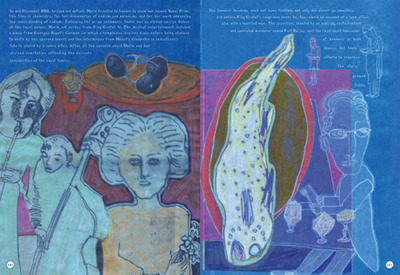 Indeed, both the charm and the horror of Radioactive is that, like its primary subject, its essayistic explorations radiate into wholly unexpected and thrilling places. Even the form of the book replicates its radiating content through a process called “cyanotype printing, in which a drawing is, through a chemical process that involves sunlight, turned into a kind of glowing negative of the original. As Redniss explains,

Cyanotype is a camera-less photographic technique in which paper is coated with light-sensitive chemicals. When the chemically treated paper is exposed to the sun’s ultraviolet rays, it turns a deep blue color. Photographic imaging was critical to both the discovery of X-rays and of radioactivity, so it made sense to me to use a process based on the idea of exposure to create the images in Radioactive.

It’s an effect that permeates the book—even its cover glows in the dark—and creates a uniquely infectious reading experience that reminds us just how expansive the form of the essay can be. As the National Book Award judges put it:

Redniss’ achievement is a celebration of the essential power of books to inform, charm, and transport. In marrying the graphic and visual arts with biography and cultural history, she has expanded the realm of non-fiction.

READ SAMPLES FROM THE BOOK 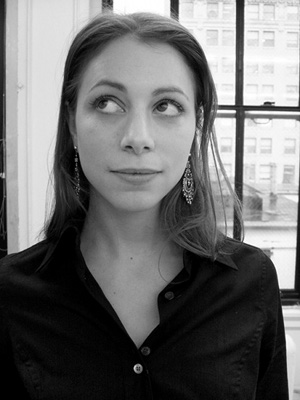 Lauren Redniss has been providing illustrations for numerous periodicals for years, including The New York Times, which nominated her work for a Pulitzer Prize. Besides Radioactive: Marie & Pierre Curie, A Tale of Love and Fallout, which was a finalist for the National Book Award, Redniss is also the author of the visual book-length essay, Century Girl: 100 years in the Life of Doris Eaton Travis, Last Living Star of the Ziegfeld Follies. She has been a fellow at the Cullman Center for Scholars & Writers at the New York Public Library and in 2010 became a New York Institute for the Humanities fellow. A recipient of a Guggenheim Fellowship, Redniss is currently the Artist-in-Residence at the American Museum of Natural History. She teaches at Parsons the New School for Design in New York City. Read an Interview with Redniss
Close Menu